Do you have handspinning questions? Are you looking for answers? Don't worry, Ms Spinster understands and is ready and willing to answer any questions. How do you think she came to be nicknamed: PatsyZ Most Excellent Spinnin' Guru.Calm
For help write to Patsy at spins(at)spinninguru.com.
Your question and her answer could be posted on this web page.
Use the search tool and category list on the right to find the answer to your question.

Can I Keep It? This Wheel Followed Me Home....

A large walking wheel now lives with me, another case of a wheel following me home from an event.  This time SOAR 2013, St. Charles, IL.  I live nearby and my husband drove it home. 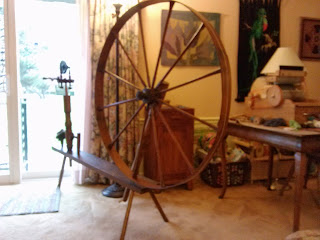 Ever since I learned that my grandmother spun on a walking wheel, taught my aunts to spin, and my mother (the baby of the family) to hand card, I have always wanted a large spindle point wheel.  I have and enjoy my 2 charkas, and enjoyed teaching spinning on a walking wheel, but never thought there was quite enough room in our little house.  Perhaps there still isn't but the wheel followed me home just the same.

In my mother's mountain cabin, the spinning pretty much stopped before she was old enough for spinning lessons, the family had become well off enough to purchase "boughten yarn".  Then the spinning wheel basically set on the porch unused as the family grew up, out, and down the mountain.  It had already left, "had walked away" before someone thought it might be worth keeping.   Perhaps it looked like this one.

I have found myself studying back in my books about wheels.  Patricia Baines, Spinning Wheels, Spinners & Spinning; David Pennington and Michael Taylor, Spinning Wheels and Accessories; Peter Fowler, How to be Owned by an Antique Spinning Wheel - A Practical Guide; and Katy Turner's succinct The Legacy of the Great Wheel.  Oh the joys of having a good library!


I was told that the sellers had bought the wheel a few years back and understood it to be from the Evanston, IL area.  That it might date back to the 1870's.
I know that I have a Minor's head attachment, for increasing the speed.  This was granted an American patent in 1803 by Amos Minor, and in 1810 the company was creating six to nine thousand a week.

The Minor's head is now working, after loosening the wooden screws, stabilizing it in the head post, and replacing the band with very fine handspun flax.

The light weight, great wheel turns easier on the carved cone-shaped post after I tipped the wheel just a bit so the top of the carved cone was level to the world.  The wheel spindles are simple and the rim is made of two shaped very thin stripes of oak.